The Joy of Architecture

Architecture has long transcended the simple work of designing and placing together the elements of some type of building. Rather, we acknowledge that when practiced at its highest levels, this is an art form of magnitude and majesty. In what must generously be accepted as less than ideal times, why not spend some moments considering the Joy of Architecture.

At the top of this post is an ingenious shot from the floor of a concrete canyon in Singapore. The framing of the airplane transiting through the “opening” is remarkable, and succinctly accents the sheer verticality of the structures.
Any post hoping to discuss The Joy of Architecture has to include the Taj Majal, shown below. It is not a widely known fact, but the Taj was built as a mausoleum by Shah Jahan in Agra, India, as the tomb for his “favorite” wife. Largely completed by 1643, this white marble master work was certainly commissioned on a somewhat sad note. However, time has built an inspirational legacy around it for generations to enjoy. 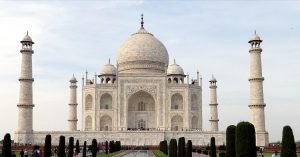 If a work of architecture can symbolize a nation, the soaring, triumphant wings of the iconic Sydney Opera House below certainly achieves that and more. According to one of the most authoritative sites on the House, “the architect Jørn Utzon was a relatively unknown 38 year old Dane in January 1957 when his entry was announced winner of the international competition to design a ‘national opera house’ for Sydney’s Bennelong Point. His vision for a sculptural, curved building on the Harbour broke radically with the cube and rectangular shapes of modernist architecture. The building transformed his career and, in turn, transformed the image of an entire nation.” 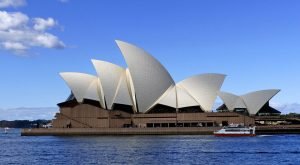 Ludwig Mies van der Rohe is most often associated with the “less is more” master premise. He completed the Farnsworth House below for Edith Farnsworth in what is now suburban Chicago in 1951. The steel and glass home came to epitomize a certain post-war aesthetic. However, the critics will often cite the lack of functionality that Mies traded for his visionary International Style that supported his “less is more” demand. More than one snarky comment has been made that this work proved that “less” can really just be “less.”  History has probably come down on the side of Mies. 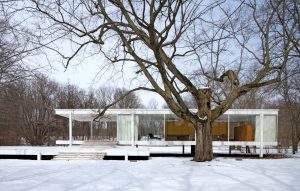 We hope that the power of elegant architecture raises your spirits just a bit in these trying times. Stay tuned for a few more posts similar to this one. Stay safe and message me if you would like any suggestions on curated further reading.
John Valentine 305-986-1046