There was a time when the architectural appetite for “glass buildings” was seemingly inexhaustible. I vividly recall my first visits to Dallas and Houston forty years ago. Being young and less than brilliant, it was startling to observe the sheer volume of glass. “Where did they get it all?” Let’s start The Joy of Architecture – Part Two – Glass. 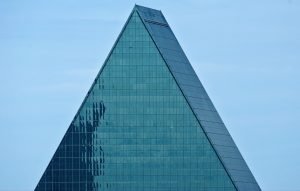 There  are few better examples of Texas and glass than the I. M. Pei, Henry Cobb collaboration in Dallas: Fountain Place. Completed in 1986, the prismatic structure is unique in offering radically different visual profiles, depending on the location that it is seen from. Completed in 1986, Fountain Place was the second or third tallest building in Texas, depending on the tall tale you subscribe to. Above is a great shot of the very top of the building. 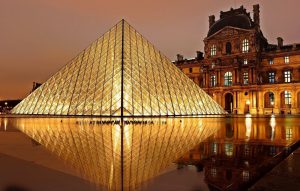 Continuing with I.M. Pei, few things he ever created met with more initial resistance than his Louvre Pyramid above. The work was completed in 1989 as the new entrance to the museum. Commissioned by then French President, Francois Mitterrand, the Pyramid shocked
Paris and all of France.
I happened to be in Paris with a colleague right after the opening. To use a current term, “outrage” was everywhere. The glass was out of place with the existing building. The shape was deemed to be too foreign, that being Egyptian. How dare Mitterrand employ a Chinese-American architect? Before the current world-wide health issues, the Louvre was the most visited museum in the world, and the Pyramid has facilitated that. So perhaps a win for the visionaries.

Moving back across the Atlantic, the City of Seattle worked with the Dutch architect Rem Koolhaas to create a new Seattle Central Library, as shown above. It was funded by a public spirited 1998 bond issue and became the third Seattle central library when it opened in 2004.

My personal impression of the Koolhaas work was more of the faceted visual than of the glass. A very professional opinion was offered in Architect Magazine: Witold Rybczynski wrote. “The library looks like a giant piece of urban infrastructure, an impression heightened at night, when the crisscrossing trusses of the bridgelike structure are apparent inside the faceted, glowing lantern.” I will leave it there.

We continue with the aspiration that the power of architecture can raise your spirits. Stay tuned for a few more posts similar to this one. Stay safe and message me for suggestions on curated further reading.
John Valentine 305-986-1046