The Gilded Age in American history is generally considered to have begun around 1870 and continued until the turn of the century or even a bit beyond. Imagine, if you can, the grand lifestyles that John D. Rockefeller, Cornelius Vanderbilt, Andrew Carnegie, and their like lived. This is obviously an overly broad topic. That said, let’s focus on the great hotels that the so-called “Robber Barons” might frequent. Then also take a look at the lodges from that same period situated in our national parks. The Joy of Architecture – Part Twelve – Grand Lodges is our topic today.

Maryville University in St. Louis has an interesting online program where I found this description of the period: “The progress made in the United States during the Gilded Age can’t be denied. As part of the Second Industrial Revolution, the country underwent an impressive economic expansion — led by the day’s larger-than-life figures of wealth and power. Much of this growth was courtesy of railroads — which now spanned from coast to coast — as well as factories, steel, and the coal mining industry.” Let’s get going with a few examples of how this manifested itself in terms of our topic.

The Grand Hotel on Mackinac Island, Michigan, opened in 1887. The architects were the Detroit firm of Mason and Rice. I have only been to this property once, and only a few memories remain. The ferry ride over to the island was an experience all by itself. Once there, the prevalence of the water and the incredible porch are stuck in my mind. That porch is supposedly the longest in the world. As a relatively young man, this was “grand” in every sense of the word, and I thought I could get used to it. 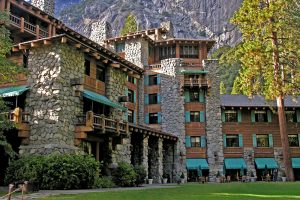 The Ahwahnee Hotel, opened in 1927 within Yosemite National Park, has long been on my bucket list, where sadly, it still remains. Gilbert Stanley Underwood, a “celebrity architect” of the period, did the original design. He was known for other lodges in such national parks as Zion, and Bryce Canyon. This work is considered to be a quintessential example of the organic, rustic style of many of the more notable National Park accommodations.  There have been some operational and management issue here and a name change of some type. Nevertheless, I hope to eventually get there to see it for myself. 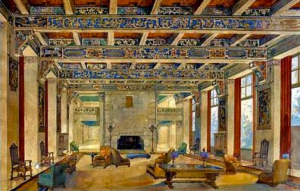 The Grove Park Inn in Asheville, North Carolina, opened its doors on July 1, 1913. It is probably fair to say that it gave birth to the modern Asheville that we know today. The early days of the Inn saw a constant list of the A-List celebrities of the era from F. Scott Fitzgerald to Eleanor Roosevelt, Woodrow Wilson, Henry Ford, John D. Rockefeller, and who knows who else. 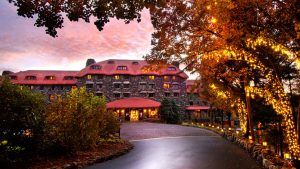 We are a stone website, so the fact that the Grove Park Inn is a case study in old-school granite construction is no small matter to us. According to the Inn’s website “four-hundred men worked 10-hour shifts six days a week. With only the use of mules, wagons and ropes, granite boulders, some weighing as much as 10,000 pounds, were hauled from Sunset Mountain to build the hotel.” William Jennings Bryan, in giving the address at the grand opening, said that it “was built for the ages.” He was correct. 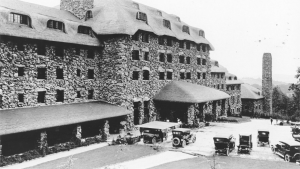 What is the real estate mantra? Location, location, location. Not that the Park Service would see things through such a lens, but if they did, nirvana would be the Old Faithful Inn in Yellowstone National Park. In this case, location means being within easy viewing proximity to the internationally known Old Faithful Geyser. 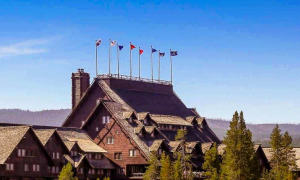 In terms of architecture, the overused term “soaring” is entirely apropos. Author Robert Schullery wrote in his book, Searching for Yellowstone: “The most famous Yellowstone hotel is the Old Faithful Inn. Architect Robert Reamer’s original log structure was augmented by additional (and rather less attractive) wings in 1913 and 1928 and soon became a Yellowstone landmark almost on a par with Old Faithful itself. The cavernous lobby, the massive fireplace, and the rustic interior balconies and stairs still awe visitors today, and many of us find it hard to imagine the Upper Geyser Basin without that gigantic gabled roofline.” 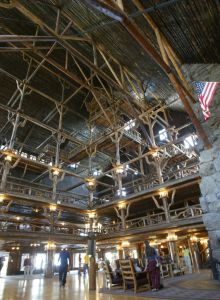 I visited after a horrible fire had swept the park, and had been warned that a disappointment might await. The struggle of the natural Yellowstone was a bit painful to visit for sure. On the other hand, man-made details like the 85-foot-high stone fireplace in the lobby, of what is thought to be the largest log structure in the United States, more than made up for it. 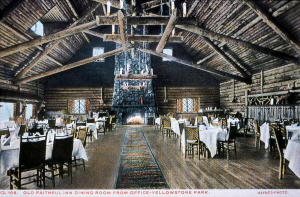 Located as they are in upstate New York, the Adirondack Mountains are well known as a regional vacation spot. However, they have never seemed to capture the national imagination in the same way as the Rockies or the Great Smokies. That said, anyone who has been there will attest to that fact that the Adirondacks should not take a back seat to anyplace in terms of sheer majesty. At the top of this post, we alluded to an American Gilded Age and the class of people that drove it. The Sagamore Resort on Lake George, in upstate New York, was exactly their type of place and the Adirondacks their type of destination. 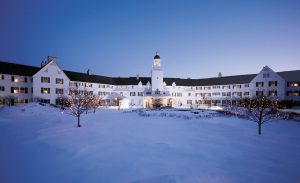 According to the resort, “hotel operator Myron O. Brown was inspired to build an exclusive resort community in the Adirondacks with luxurious Lake George accommodations. He turned to support from four Philadelphia millionaires who summered in the stately mansions on the lake’s western shore: E. Burgess Warren, William B. Bement, Robert Glendenning and George Burnham.” A classic Victorian masterpiece, this property was a center of high society for decades before falling on hard times in the early 1980’s, then reestablishing the brand over the last ten or twelve years. 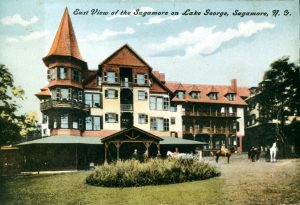 Glacier National Park is a destination that is not typically on the way to somewhere else. Nevertheless, go when you can because it is one of the most amazing places on the planet. Part of the experience is to visit the Glacier Park Lodge, which opened in 1913. It is technically slightly outside the park proper, on Native American land, but that was a seamless experience during our visit. 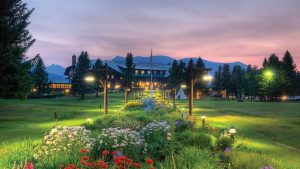 In the 21st Century, it difficult to look back and clearly see how important the railroads were to the expansion of America “from sea to shining sea.” In this case, it was The Great Northern Railway that drove the development of the lodge. In fact, the Amtrak Empire Builder train still stops at “East Glacier Park” on its schedule. 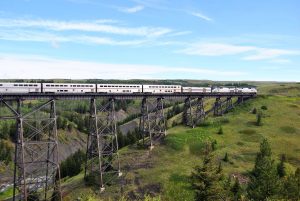 An employee handbook on the history of the lodge, published in 2016, said: “The hotel was a marvel to behold, both inside and out. The ‘big tree lodge,’ designed by architect Samuel Bartlett, featured a forest lobby of huge Douglas fir timbers, each more than 40feet tall and up to three feet in diameter. It had taken more than a year to build, the work of St. Paul contractor Edwin Evensta and his crew of nearly 100 men.” 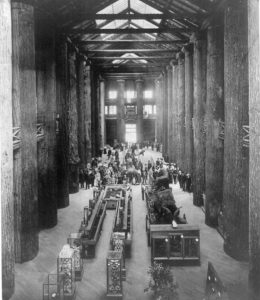 There you have a very quick glimpse at six grand lodges. We have added a bit of history, architecture, and personal recollection to each. These properties are not simply examples fine lodging, but also memorable experiences to hold on to for a lifetime.

This is the latest in the series: The Joy of Architecture. Please click here to find them all.  Stay tuned for more. Be safe, and message me for suggestions. John Valentine 305-986-1046.