Frank Gehry has inspired a nearly unsurpassed degree of polarization across a spectrum of observers. Included in the discussion are fellow architects, critics, and naturally the casual fans of architecture. Let’s jump into The Joy of Architecture – Part Three – Frank Gehry. 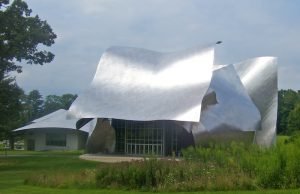 On one side of the discussion , Eric Wills at Architect Magazine wrote that “critics have assailed Gehry and his fellow ‘starchitects’ of producing preening buildings that exhibit little regard for their context and the unfortunate souls who have to use them.”
Architectural critic, Paul Goldberger, takes another approach:
“He’s very, very concerned with function—he cares about where the toilets go, and where you come in, where you go out, and where the closets are. It’s not an autocratic or arbitrary architecture. It’s an architecture that has its own formal language, but within that language he’s interested in solving problems, not just making shapes. His imagination is never in doubt—because everyone sees that….” 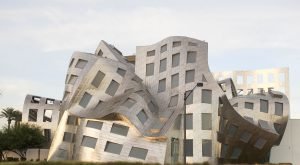 The imagination of Mr. Gehry aside, when you look at his work there is a quick question that comes to mind: “How do you actually build these things?” His use of CATIA software (Computer Aided Three Dimensional Interactive Application) began in 1993 and allowed for very precise calculations of tensions and stresses that had not typically been a factor in architecture. The French company, Dassault Systèmes, describes their product as delivering “the unique ability not only to model any product, but to do so in the context of its real-life behavior: design in the age of experience.” Nowhere was this tool used more importantly than at the Guggenheim Museum Bilbao, as shown both below and at the very top of this post. 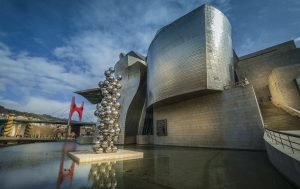 Although I have only seen one or two Gehry buildings in person, one thing is for sure. You are left with a sense of how to describe them.  Is it possible to think of them as having a “stream of consciousness visual”? Or, going back to Eric Wills again: “Gehry’s projects make for a kind of architectural Rorschach test.” We can leave it there for now,

This is Part Three on the Joy of Architecture. Part One is here and Two here. We continue to believe  that the power of architecture can elevate your spirits. Stay tuned for a few more posts similar to this one. Stay safe and message me for suggestions on curated further reading.
John Valentine 305-986-1046