Phillip Johnson was both responsible for, and guilty of, a dizzying collection of buildings that have defined urban skylines in America for almost seventy years. He made controversial statements, held difficult political views, and designed and/or helped design prominent, and polarizing buildings. Let’s get going with The Joy of Architecture – Part Ten – Phillip Johnson.

He was born into fine circumstances in Cleveland in 1906, studied at Harvard, toured Europe after completing that work, then joined the Museum of Modern Art in New York in 1930. There, he helped curate a now famous exhibition of modern architecture that brought to American prominence such names as Mies van der Rohe, Le Corbusier, Walter Gropius, Marcel Breuer, and more.

Mr. Johnson had such a long and varied career that we must, for the purposes of a blog post, focus on just a portion of his work. While today we still stick to a few of his towers, for the reader who wants a more fulsome experience may I suggest: “The Man in the Glass House,” by Mark Lamster. 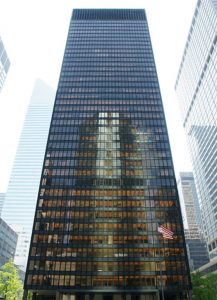 The Seagram Building, shown above, helped to define the urban America of the post-World War II world. Largely designed by Mies van der Rohe for the Canadian Seagram family, it was completed in 1958 as the most expensive skyscraper in history. The bronze and glass visuals it presented came to symbolize the International Style as a functioning corporate genre. Phillip Johnson is connected to this work for a variety of reasons. He was essential in putting Mies together with the Seagram family, he did the interiors, and more importantly, it set him on his way to producing more towers. 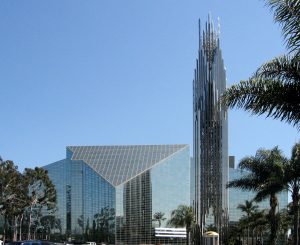 A key career juncture for Mr. Johnson was his partnership with John Burgee that began in the late 1960’s. The argument is that Mr. Burgee brought the corporate C-level personal presence that enabled the duo to acquire clients with the funding to build skyline-defining skyscrapers. Johnson/Burgee then went on a run of architectural prominence that garnered them a level of attention that was startling. The famous, or infamous, Crystal Cathedral in Orange County, California, is above. Below, is PPG Place in Pittsburgh, Pennsylvania. In my view, the work above was startling while the tower below was inspirational. One man’s view. 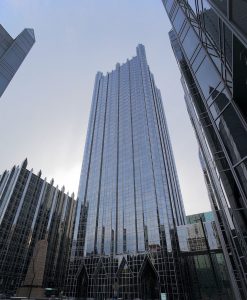 As mentioned previously, not everyone was enamored with the Johnson style. However, taken in the aggregate, the author of the book mentioned above, Mark Lamster, may have said it best with this observation:  “Johnson’s buildings are ubiquitous, but his influence far exceeds their mere presence. He was a shaper not just of individual structures or even of cities, but of American culture.” A good example is below. “The Lipstick Building” at 53rd and Third in Manhattan is not for everyone. The red granite, stainless steel, and overall shape that inspired the supposed likeness to a tube of lipstick was completed in 1986. Bernie Madoff headquartered here, other than that, it is splendid. 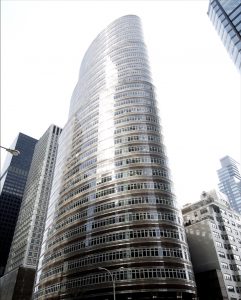 It is significant to understand that Phillip Johnson was a mercurial person. He did not begin his formal training in architecture until he was 34 when he returned to Harvard, where he had previously taken a philosophy degree. In the Europe of the 1930’s, he had more than mere flirtations with fascism, especially the Nazi version. Mr. Johnson barely concealed, if he concealed it at all, his anti-Semitism. All this, while being a somewhat openly gay man in a cultural period when that required distinct bravery. 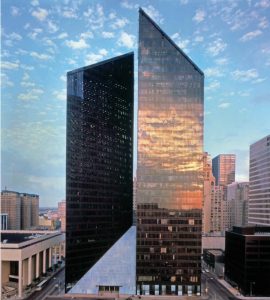 A mercurial person is often a flexible person; this was a useful characteristic in dealing with the parade of clients that funded glass towers in the ‘70’s. Houston developer Gerald Hines wanted a distinctive tower. So Johnson gave him two as shown above for Pennzoil Place. The IDS Tower in Minneapolis below would gain a degree of cultural fame as a setting for the genre-shifting “Mary Tyler Moore Show.” Such an unintended result could not have been foreseen by even the master architect himself. 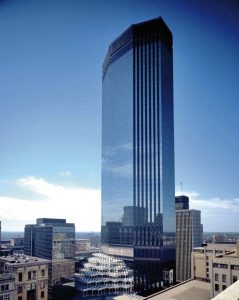 Up to this point, architecturally speaking, Phillip Johnson had continued to toe the Modernist line. Again from Mark Lamster: “As far as he was concerned, Mies van der Rohe had theorized what a truly modern skyscraper might be: a crystalline tower with a steel skeleton visible through its translucent glass skin. That was the future.” Then the partnership with Burgee took a turn.

Writing in the Los  Angeles Times, architecture critic Christopher Hawthorne said : “Never one to let conviction stand in the way of a juicy commission, Johnson began to throw in his lot, stylistically speaking, with the emerging post-modern movement, which replaced the flat roofs, glass curtain walls and forward-looking gaze of modern architecture with strategically deployed ornament and nods to history.” Then, just like that, there was the AT&T building below. 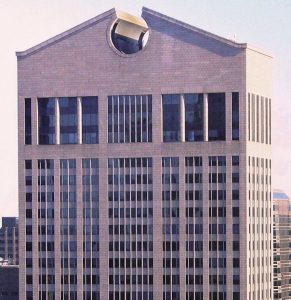 Journalist Jenna McKnight, writing in Dezeen, said:“When it opened in 1984, the AT&T Building stood in stark contrast to the boxy glass-and-metal towers that had sprung up in Midtown Manhattan since the 1950s. Regarded as the first Postmodern skyscraper, the 37-storey building – designed by Philip Johnson and John Burgee – featured a number of ornamental flourishes, from its granite cladding and ‘Chippendale’ roof line to its brass and marble finishes on the interior.” On my first visit to this building, it was very hard for me to mentally “move” from the Seagram Building to this iteration of the Johnson career. The “Chippendale” thing was utterly baffling. I mean, “a giant pink granite armoire?” All this said, thirty-five years down the road, the work has aged well in terms of both critical and public acceptance. 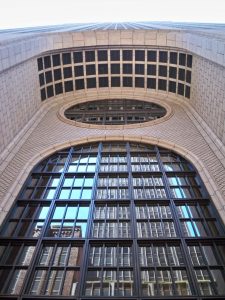 There was more work after this, but an argument can be made that here was the high-water mark. Johnson was awarded the initial Pritzker Architecture Prize in 1979. The Johnson- Burgee partnership slowly devolved, and then finally collapsed.

There are so many aspects and avenues of this career that it is not possible for a mere blog post to begin to review them all.  For example, no mention has been made here of the many homes designed by Mr. Johnson, not  the least of which was his own, “The Glass House,” in Connecticut. This leads us to point out again that there is ample scholarship on this topic. In addition to the previously mentioned work by Mark Lamster, there is Johnson’s own “The Architecture of Phillip Johnson.” There are many others.

Philip Johnson passed away in 2005. He said strange things like “Architecture is the art of how to waste space.” He tolerated a range of personalities from radio priest Father Coughlin, to the young Atlantic City version of Donald Trump. He also left us a resplendent collection of buildings to visit, and admire or detest.