Train travel in America has always felt like a great idea that didn’t feel so great in reality. However, most Americans visiting Western Europe have experienced something different. Why not take a look at a few classic rail terminals from an architectural perspective? Here we go with  The Joy of Architecture – Part Six – Railway Stations.

Milan is never quite on the lips of the American tourist in the same manner as Rome, Venice, Florence, the region of Tuscany in general, and all the other familiar destinations. That said, the capital of Lombardy is a very interesting city to visit on its own merits. Milano Centrale is the main railway station and offers fine service East, West, and South.

According to ItaliaRail.com: “It was opened in the early 1930s, replacing an older and smaller station. The imposing design of the building’s facade was intended to showcase the dominance of then-Prime Minister Mussolini’s fascist regime.” My personal recollections are less of the facade and more of the amazing “soaring glass and metal arched roof over the platforms.” Hopefully, the image at the very top of this post gives the proper sense of drama the roof creates for passengers. Did Benito Mussolini really “make the trains run on time?” I can’t speak to that history, but they ran on time for me. 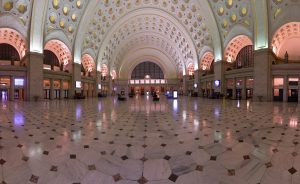 Quickly crossing the Atlantic to Washington, D.C., we find Washington Union Station, as shown above. Any building that has architect Daniel Burnham on its “resume”  has an instant amount of “street cred.” Amongst the many quotes attributed to Burnham is: “Make no little plans; they have no magic to stir men’s blood.” By any measure, Union Station was designed to “stir men’s blood” in sweep and grandeur.

According to the station’s superior website: “During its heyday in the early 1940’s, Union Station was a thriving transportation hub serving up to 42,000 passengers daily. After 1945, conditions deteriorated quickly. The demand on transportation during World War II wore greatly on the station.” Planes and cars began to occupy the public psyche as modern airports and interstate highways beckoned. 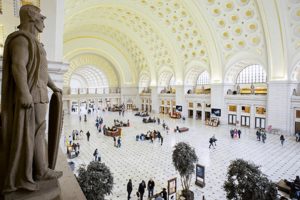 Today, Union Station has survived benign neglect, a runaway train in 1953, an earthquake in 2011, and more visiting schoolchildren than anyone can count. Yet, the epic arches, patterned stone floors, and coffered ceilings of the Main Hall still present a scale and elegance fitting of Burnham and his “make no little plans” dictum. 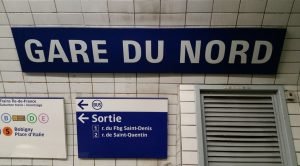 Being the jet-setters that we are, it’s off to Paris for Gare du Nord, the busiest railway station in Europe. It may be heavily used, but this is not the most beautiful station in France, much less on the whole of The Continent. Per railway-technology.com, it “was designed by Jacques Ignace Hittorff, a German-born French architect. Jacques adopted a Beaux-Arts (neoclassical) style of architecture in the design of the railway station, which has a U-shaped terminus.”

The Beaux-Arts aspect of Gare Du Nord is described well by Beau Peregoy in Architectural Digest: “Revivals of old movements were par for the course in Europe. At the École des Beaux-Arts in Paris, however, the phenomenon was refined to a distinct style, a beautiful reimagining of the history of architecture. The style was named after the school itself. Steeped in classical instruction, Beaux Arts architects created monumental buildings that were built with perfect Renaissance form, outfitted with Greek and Roman elements, and bejeweled with baroque ornamentation.” 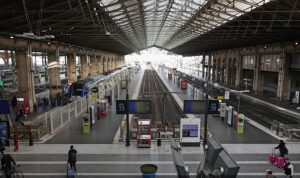 So why include Gare du Nord in this post? In my visits, the station had gravitas, or at least a cinematic version. It called to mind a scowling, but heroic, Burt Lancaster conspiring with the wearily elegant Jeanne Moreau. Each character hoping to thwart the evil, iconoclastic Nazi, as played by Englishman Paul Scofield, in the 1964 John Frankenheimer film, “The Train.” In summation, if you are in Paris you shouldn’t miss it. If you have seen it already, you probably remember it. What else is there to say? 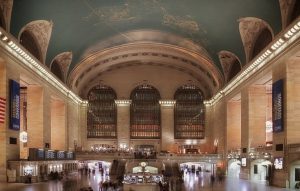 The last member of our foursome is also my favorite: The Grand Central Terminal in New York. The first iteration of GCT was a Cornelius Vanderbilt project opened in 1872. This was followed by a second version circa 1899, leading us to something resembling the current form,  which began construction in 1903.

The selection of an architect for the work was conducted via a competition that the station’s website describes as: “Four firms entered: McKim Mead & White, Samuel Huckel, Jr., Reed & Stem, and Daniel Burnham. Reed & Stem won.” Subsequently, another firm, Warren & Wetmore, was added to the team to contribute to the overall design plan. The construction took about ten years. An enduring aspect of this work was the moving of the station tracks underground. Thus were created “air rights” for the development of the real estate above the Terminal, contributing to the transcendental boom in the surrounding area of Manhattan. 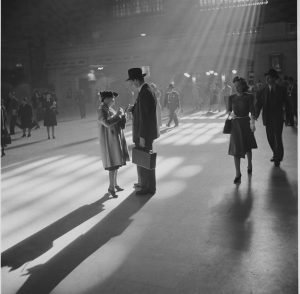 Grand Central is a national treasure, and yet another descendant of the Beaux-Arts stylistic architectural tree. There are too many architectural, engineering, and innovative elements in place for this writer to do justice to:

– Floors of a Tennessee Pink marble that is now almost extinct.
– The strange orientation of the painted ceiling.
– Sculpted oak leaves and acorns. A Vanderbilt family flourish.
– Ramps rather than stairs.
– A USO branch inside GCT during WWII.
– The secretive M42 location.
– GCT was the first all-electric building.
– Clocks, clocks, and more clocks. 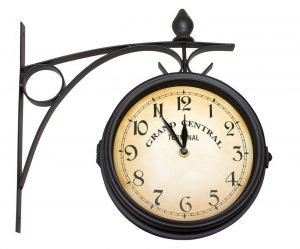 In 1963, Pennsylvania Station, another Manhattan landmark, was torn down. Of course, Grand Central was considered to be next on the chopping block. As luck would have it, a coalition emerged to save the day. The GCT website says that “former first lady Jacqueline Kennedy Onassis and architect Philip Johnson founded the Committee to Save Grand Central Station in 1975. In 1978, the U.S. Supreme Court upheld Grand Central’s landmark status.” Ms. Onassis, in all her elegance, is shown below with then Mayor Ed Koch. 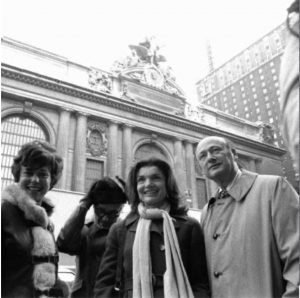 In January 1995, a renovation of the terminal began with the goal of accomplishing the most significant rehabilitation in its history. Once more to quote the GCT site: “the master plan reimagined Grand Central as a vibrant shopping and dining destination, reclaiming its role as New York’s town square.” Prior to the arrival of an unwanted guest in Covid-19, most folks believe this was accomplished. 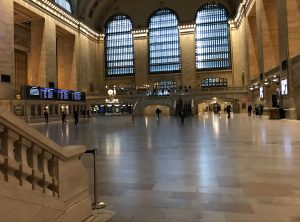 As you can see above, the great Station stands, for the moment, a bit lonely. Times will change. We will sort things out for the better. Then, commuters, tourists, workmen, and local folks alike will bustle and meander through it.

We have attempted to provide, with this series, some diversion in these troubling times. Please don’t take our word on these four landmarks. When the time is right, go see them for yourselves. Be safe!

The entire Joy of Architecture series can be found here.