How did Eero Saarinen, a Finnish-born and Yale-educated architect, manage to so greatly influence the twentieth century image of an America just entering a new technological age? The answer lies in two airports, and a re-imagined classic shape. The Joy of Architecture – Part Seven – Eero Saarinen.

Saarinen was born in Finland in 1910 and came to The United States in 1923. His dad, Eliel Saarinen, was also an architect and the name confusion to American ears would create a moment of chaos years later. Eero was quite prolific in America, but today we only intend to focus on three of his works. Let’s start with the Arch in St. Louis. 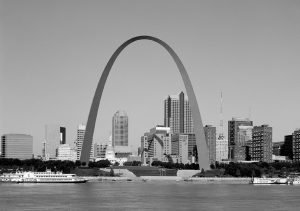 The Gateway Arch was initially inside the Jefferson National Expansion Memorial. The park/memorial was then renamed as the Gateway Arch National Park in 2018. Park and arch both had their genesis in the 1930’s as an effort by local St. Louis folks to rehabilitate their Mississippi River frontage. After years of political wrangling, and a World War, a competition among  architects was opened in 1947.

The challenge drew a collection of design stars such as Louis Kahn, Charles and Ray Eames, Walter Gropius, both father and son Saarinen, and Minoru Yamasaki, soon to design the World Trade Center. In 1948, a decision was made and a telegram sent to the office of the winner. Eero had prevailed, but the telegram went in error to his dad, Eliel. The problem was quickly sorted out, and St. Louis would have its iconic symbol. 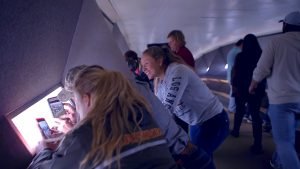 I have been to the Gateway Arch more times than can be recalled, but only once did we take the time to go inside and ride to the top. Yes …..you can take a tram. Have a look above. Click on that image or here to watch the video of the journey.

There are many “fun facts” associated with the Arch:

1. We have already mentioned the confusion between father and son as to the winner of the competition.
2. It is the same height as it is wide, that being 630 feet.
3. Then, according to Architectural Digest: “The arch’s two legs were built separately, and if their measurements were off by as little as 1/64th of an inch, they would not have been able to join at the top.”
4. The shape is actually a flattened catenary. Without getting way too far in the weeds take a look at the chain below to see a “catenary.” On the other hand, if you are bound and determined to head for those “weeds,” then click here to see a brilliant mathematician give you the hardcore white board version. 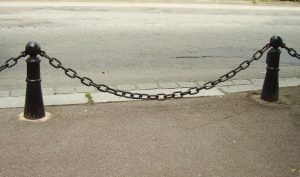 Beau Peregoy, writing in Architectural Digest, summed things up: “Built on the banks of the Mississippi River, at the starting point of the Lewis and Clark expeditions, the arch stands as a monument for the nation’s westward expansion.” More than that, it is also the symbol of solid St. Louis and the Midwest in general. Go see it! 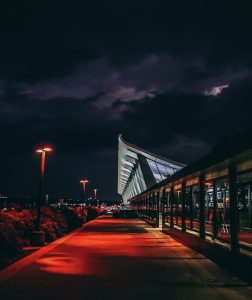 By 1950, airline travel in the United States was stressing the existing airport infrastructures to capacity. In response to this, President Eisenhower authorized another airport to serve the Washington D.C. area. Saarinen designed the terminal, named after John Foster Dulles, in 1958. Dulles International Airport was on its way.

If you are fan of this work, you see a sweeping, organic, curvilinear masterpiece that helped usher in the jet-age. Another perspective might focus on the “mobile lounges” that moved passengers from check-in to plane. They were a “Jetsons” type super-cool thing when the airport opened “back in the day,” 1962. As you can see below, one person’s “mobile lounge” is another person’s cramped bus. Later in the life of Dulles, they became a constant annoyance to the regular, trudging, Dulles road warrior. 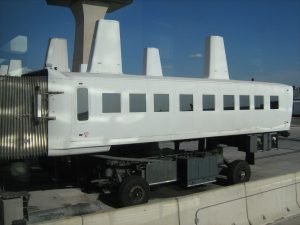 In general, time has treated this Saarinen work pretty well in terms of critical acceptance as a work of architecture. The reviews might be less glowing regarding passenger usability. From my chair, Mr. Saarinen cannot be held accountable for a lack of building updating, or the general condition of the American air transport infrastructure. 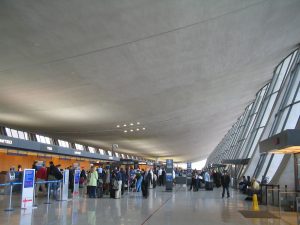 You can argue that the most perfectly symmetrical marriage of design and commerce in Mid-Century America was the union of Eero Saarinen and TWA Airlines, at what was then Idlewild Airport in New York City. TWA never really made it into the 21st Century in any meaningful way, Idlewild became Kennedy, and the famous terminal is now a hotel. But once upon a time….. 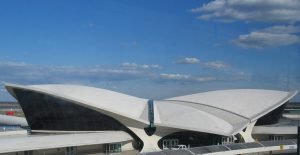 Opened in 1962 amidst much design fanfare, the TWA Flight Center, as shown above, heralded the true arrival of  the Jet Age. Symbolic of airline travel, design, and internationalism, none other than Robert A. M. Stern called it the “Grand Central of the Jet Age.”

It was in 1955 that Saarinen’s Detroit architectural firm was selected by TWA to design their new terminal in Metro New York. An important thing to understand, retrospectively, is that air travel was not yet “mass travel.” The logistics of merely moving people from arrival to departure was a nascent challenge. Beyond the soaring winged roof, the design came up with real solutions such as:

All of these seem mundane now, but not sixty years ago. Sadly, TWA went the way of so many of their iconic fellows. Household names such as Pan Am, Braniff, Eastern, and many others simply did not survive the transition in air travel from a luxury journey to mass transit. The TWA Flight Center fell into disuse and disrepair.

Happily, it was saved from a very bad end by the National Trust for Historic Preservation. Today, as shown above, it is now a hotel that self-describes as having “reignited the magic of Eero Saarinen’s landmark 1962 TWA Flight Center at JFK Airport, restoring and reimagining it as a first-class hotel. At the center of the hotel is Eero Saarinen’s iconic TWA Flight Center, where restaurants, bars and retail outlets have taken flight. Two hotel wings, designed to reflect and defer to the landmark TWA Flight Center, sit behind the historic building and contain 512 guestrooms with views of JFK’s runways and the TWA Flight Center.” A contemporary feel-good story if there ever was one.

In summary, please allow me to again quote the reliable Beau Peregoy in Architectural Digest: “Saarinen’s works are not only architectural treasures but also symbols—they capture an era of technology, of futurism, and of optimism.” Mr. Saarinen passed away on September 1, 1961, never to see the three projects featured in this post completed.

Stay tuned for more similar posts. Be safe and message me for suggestions on curated further reading. John Valentine 305-986-1046.

This post is the latest in a series on the Joy of Architecture. Please click here to find them all.