Fallingwater is arguably the most famous work of Frank Lloyd Wright. So many words have already been written that I am loathe to post about it at all. On the other hand, how can a series about architecture leave Fallingwater out? That said, I lived very close by for a short period, and made two visits. The Joy of Architecture – Part Nine – Fallingwater, will contain a liberal dose of personal observations. 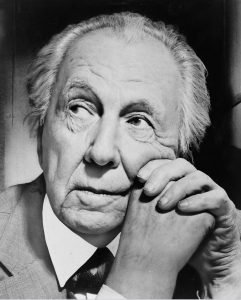 Mr. Wright designed this residence for Edgar Kaufmann, Sr. and his family in 1935. The Kaufmann’s were well known for their department store chain of the same name. The site is about an hour southeast of Pittsburgh, as you can see on the map below, and was intended to be a weekend home that the Kaufmann’s could access quickly from The ‘Burgh. Here is the first personal aside: as a very young guy I was told I needed to “build up my credit.” Since I was living in Western Pennsylvania, you guessed it, my first credit card was from Kaufmann’s Department store. 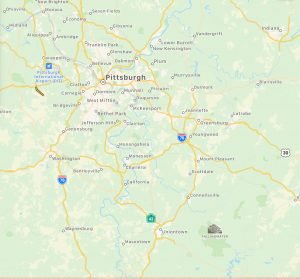 Given that the site had a stream and waterfall for him to work with, Mr. Wright held in his hands a sterling opportunity to practice his ideas on organic architecture. Yet, his real genius moment may have been to convince his clients not to simply observe these water features, but to actually live with them. But convince he did, and upon its completion, Fallingwater resuscitated his career and solidified the Wright Legend. More on that legacy later. 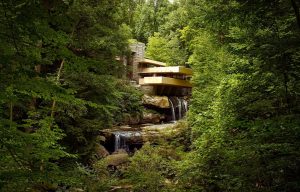 Let’s elaborate a bit more. It is hard to find a more comprehensively informative website than Fallingwater.org. Here is small slice: “The epitome of ‘organic architecture,’ Fallingwater’s design symbolizes the harmony between people and nature. Through thoughtful design that is seamlessly integrated with its natural setting, the building, its furnishings, and the surroundings become cohesive parts of one unified, interrelated composition. This, Wright described, was ‘Where the whole is [to] the part as the part is to the whole and where the nature of the materials, the nature of the purpose, the nature of the entire performance’ are all equally important to the resulting building.”

Please understand these posts are written from the perspective of a person who has worked with architects and designers for almost forty years. I make no pretense to formal training, and it is my hope that they present themselves as impressionistic in nature. That said, my visits to Fallingwater amount to stream of consciousness recollections. 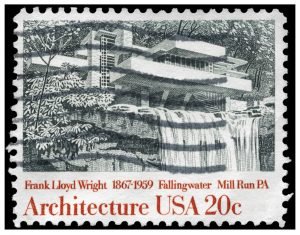 Both visits were in the late ‘70’s before I had any professional connection to architects or architecture. It was supposed to be a cool place to go. So, off we went. Once was certainly in the Fall, the other probably in the Spring, and there was a seasonal uniqueness to each. The staff folks were amazingly knowledgeable. Their passion for the subject matter blazed through. They taught us “cantilever.” It is one thing to hear about cantilevering, and altogether a different thing to experience it at Fallingwater. I felt damp. The proximity of the water was slightly disorienting, but still pleasant. To a person who had spent fifteen years in suburban ranch houses, it seemed less like a place that people had once lived, and more like a museum where people should have lived. Well, enough of this. 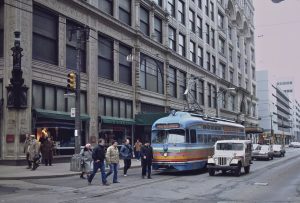 Mr. Kaufman, Sr., and his wife passed away; their son transferred Fallingwater to the Western Pennsylvania Conservancy in 1963. Reportedly, over 4 million people have visited since. The department store, to the best of my knowledge, has long since ceased to exist as a brand name, having gone the way of most enterprises of its type. Kaufmann, Jr. passed in 1989, certainly appreciating what his family weekend home had become.

The career of Frank Lloyd Wright, as discussed earlier, soared on the strength of his Fallingwater design. Starting with a Time Magazine cover feature in 1938, he became a media darling of sorts. At the time of his passing in 1959, he was the most famous architect in America, if not the world.