It is reasonable to say that the Bauhaus School was thrust into the American consciousness, or at least re-inserted, by the author Tom Wolfe with his 1981 book,  “From  Bauhaus to Our House.” Seldom has an author, the always sartorially dandified Mr. Wolfe, been more visually at odds with his subject matter. This post, The Joy of Architecture – Part Four – Bauhaus, will focus mostly on Bauhaus architecture, with only a quick nod to other artistic mediums. 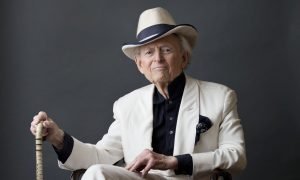 The architect Walter Gropius founded the Bauhaus School in 1919. Remarkably, given the impact it has had, the school closed in 1933 after only 14 years. In my view, what has set Bauhaus apart was all the artistic forms of expression that it included.  Graphic design,  interior design, industrial design, furniture design, typeface design, painting, and sculpture were all timelessly influenced by Gropius, his colleagues, and their students.

In the wake of the catastrophic First World War, artists seemed to be searching for meaning in their work. Gropius and friends sought to bring together beauty, function, industrialized mass production, and individual artistic expression. Not the easiest of tasks. The term, Gesamtkunstwerk, or “total work of art,” came to be a useful catch-all in attempting to understand the scope of their approach.

At the very top of this post, and immediately below, is the Bauhaus School building in Dessau, Germany, which was designed by Gropius himself. Please note the still relevant use of non-load-bearing glass curtain walls. By way of explanation for the layperson, urban settings all over America feature, building after building, almost the exact same technique that you see simply as “glass” buildings. 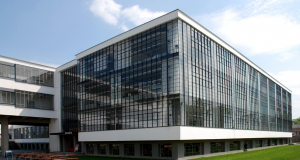 Sometimes forgotten is that the Bauhaus was a real teaching school, and not just a “movement.”  The last director was none other than Ludwig Mies van der Rohe. In the end, he is perhaps the most lauded of all the “Bauhaus Boys,” and his work has transcended any attempt to pigeon hole him. Below is a less well known Mies work: the Villa Tugendhat in the Czech city of Brno. Again, please note the use of glass.

As to Gropius, he ultimately escaped Germany and moved to the United States where he taught at Harvard. Below is a home he designed for himself in Lincoln, Massachusetts, circa 1950. Consider this  revealing thought of his: “Together let us desire, conceive, and create the new structure of the future, which will embrace architecture and sculpture and painting in one unity and which will one day rise toward heaven from the hands of a million workers like the crystal symbol of a new faith.” 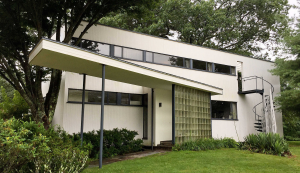 The team picture of teachers at the Bauhaus would also include Marcel Breuer, Josef Albers, Wassily Kandinsky, Paul Klee, and more. That said, it would be impossible for me to even discuss Bauhaus without mentioning, and showing the classic “Wassily Chair,” as shown below. Designed by Breuer, the piece was not originally named after his colleague Kandinsky. I am not entirely satisfied with the “how” of this famous connection, but the chair is now almost universally linked to him. 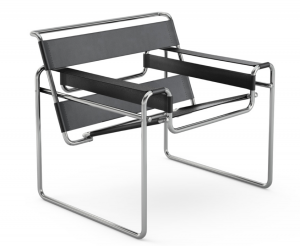 Continuing the detour from architecture, below is a particular favorite of mine. “Red Baloon” was painted by Paul Klee in 1922. He changed styles quite a bit during his career, but the balloon seemingly floating above a myriad of geometric shapes has always intrigued my amateur eye. I believe it is still at The Guggenheim Museum in New York. 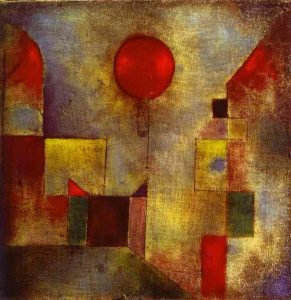 No mere blog post can do justice to the Bauhaus School. Given that these are not the best of times, perhaps this effort will inspire further investigation by interested readers. If that happens, then we have succeeded.
This is Part Four of series on the Joy of Architecture: Part One is here,  Part Two here, and Part Three here.

My hope is that the power of architecture can elevate your spirits. Stay tuned for more posts similar to this one. Stay safe and message me for suggestions on curated further reading.
John Valentine 305-986-1046