The word “museum” expresses, in the current vernacular, what amounts to a library housing various artifacts of scientific, artistic, social, historical, and cultural interest. Throughout the world, societies have invested significantly in making these buildings architectural landmarks. So let’s begin The Joy of Architecture – Part Five – Museums.

At the top of this post, and below, is the ever stolid  Guggenheim Museum in New York. Frank Lloyd Wright received the commission to design, what would be one of his most famous efforts, in 1943. It was finally opened to the public in 1959. In the years in between, both the benefactor Solomon Guggenheim, and Wright passed away. The resultant building is described by the museum as:
“Its proximity to Central Park was key; as close to nature as one gets in New York, the park afforded relief from the noise and congestion of the city. Nature not only provided the museum with a respite from New York’s distractions but also lent it inspiration. The Guggenheim Museum is an embodiment of Wright’s attempts to incorporate organic form into architecture.” The Guggenheim has always received mixed critical reviews, but there it stands as a “must visit“ on any museum trip to New York City. 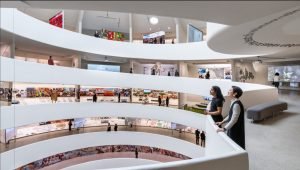 In the spirit of full disclosure, during a first visit to the Centre Pompidou in Paris below, it was very difficult to understand exactly what I was looking at. Admittedly, I am a mere fan of architecture and not any type of learned individual. Nevertheless, what I saw was a jumble of shapes that seemed to somehow be turned inside out. 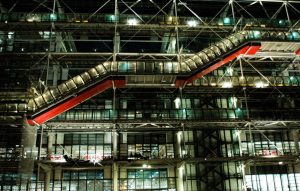 The Museum, which opened in 1977, says of itself: “Designed as an ‘evolving spatial diagram’ by architects Renzo Piano and Richard Rogers, the architecture of the Centre Pompidou boasts a series of technical characteristics that make it unique in the world – the inspiration, even the prototype, of a new generation of museums and cultural centres.” 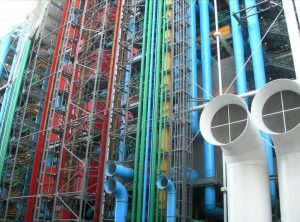 Perhaps explaining my “turned inside out” impression, are unique elements using color on the facade above. Blue circulates air, yellow circulates electricity, green circulates water, and red circulates people. Who would have “thunk it?” 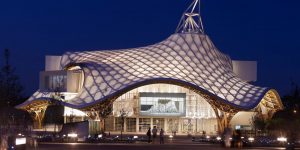 The Centre Pompidou – Metz, shown above, opened in 2010 in Metz. Given the great success of the sibling or cousin in Paris, the Japanese architect Shigeru Ban faced a significant challenge. The roof alone, which was based on a traditional woven Chinese hat,  has earned a great deal of recognition for the complex form and subsequent execution. Having clearly risen to the challenge, Ban (seen below) was the 37th recipient of the Pritzker Prize in 2014, a recognition that is considered the most important in modern architecture. This is the only building of the four in this post that I have not personally seen. That said, it seems a bit underrated in the architectural world. Then again, that Pritzker speaks for itself. 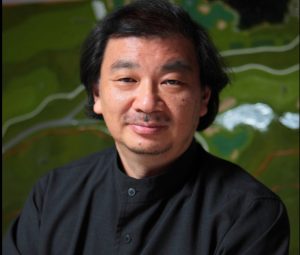 Living in the Greater Atlanta area it would be impossible for me to exclude from this post the seminal Richard Meier work: The High Museum of Art. What is perhaps the preeminent museum in the South, the High, as shown in two images below, began as a donation of a private residence from Mrs. Joseph High. 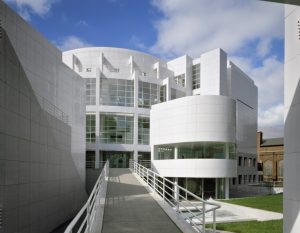 According  to the Museum: “In 1979, Coca-Cola magnate Robert W. Woodruff offered a $7.5 million challenge grant for a new facility that would triple the High’s space to 135,000 square feet. The High subsequently raised $20 million and in 1983 opened its new building (now named the Stent Family Wing). Pritzker Prize-winning architect Richard Meier designed the building, which has won many design awards, including a 1991 citation from the American Institute of Architects as one of the ‘ten best works of American architecture of the 1980s.’”

A visitor to the High Museum will first be struck by an ultra-clean initial exterior visual provided by the white porcelain enamel panels selected by Meier and his team. After entering, the architects said: “Light, whether direct or filtered, is a constant preoccupation throughout; apart from its functional aspect, light is a symbol of the museum’s role as a place of aesthetic illumination and enlightened cultural values.” If you take those words as a mission statement, then a visitor will conclude that they succeeded. 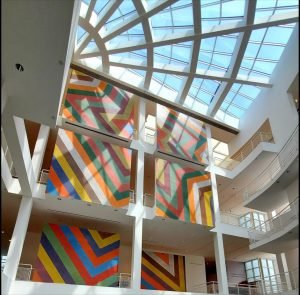 This is Part Five of series on the Joy of Architecture. Please click here to find them all.

Stay tuned for more posts similar to this one. Be safe and message me for suggestions on curated further reading.
John Valentine 305-986-1046