Your first impressions of a classic California Craftsman home might be of welcoming scale, natural feel, human usability, etc. Those were my first thoughts. Since the genre was inspired by the Arts & Crafts Movement, which was itself a reaction to the worst aspects of the Industrial Revolution, this is probably to be expected. Today we have The Joy of Architecture – Part Eleven – California Craftsman. 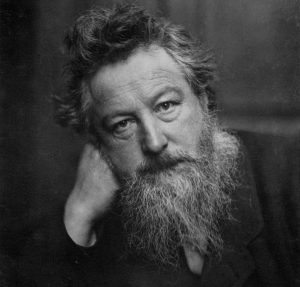 Here is a succinct description from The Victoria and Albert Museum regarding the social and design movement that eventually led to California Craftsman: “The birth of the Arts and Crafts movement in Britain in the late 19th century marked the beginning of a change in the value society placed on how things were made. This was a reaction to not only the damaging effects of industrialization but also the relatively low status of the decorative arts. Arts and Crafts reformed the design and manufacture of everything from buildings to jewelry.” Shown above is textile designer William Morris, one of the Arts and Crafts pioneers who neatly said: “Have nothing in your house you do not know to be useful or believe to be beautiful.” This is a good place to move to our main topic. 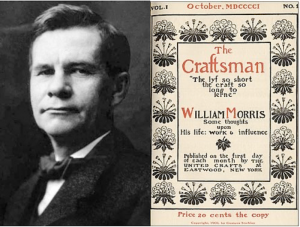 Arts and Crafts moved quickly from the U.K. across the Atlantic. The Metropolitan Museum of Art’s website tells us this: “The U.S. movement was multi-centered, with societies forming nationwide. Boston, historically linked to English culture, was the first city to feature a Society of Arts and Crafts, founded in June 1897. Chicago’s Arts and Crafts Society began at Hull House, one of the first American settlement houses for social reform, in October 1897. Numerous societies followed in cities such as Minneapolis and New York, as well as rural towns, including Deerfield, Massachusetts.” Various publications, such as The Craftsman from Gustav Stickley, came to prominence extolling the virtues of the American Arts and Crafts style, and giving the general public a better understating of its potential to impact their daily lives. 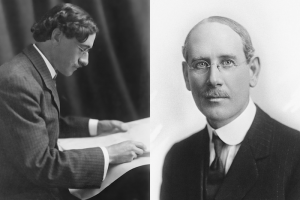 If you are relatively new to this topic, it is significant to know that the Arts and Crafts Movement was extraordinarily broad. Textiles, architecture, art, the trades, consumer products, interior design, etc. were all included in the scope of the Movement. California, and it’s moderate climate, was a natural home for the architectural elements that came to be California Craftsman. Two quick examples: The low, relatively flat roofs did not have to withstand the weight of accumulated heavy snow. Similarly, prominent Craftsman porches were even more useful to Californians than they might have been to folks in harsher climes. 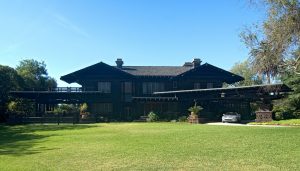 Any investigation of the architects that drove this idea has to start with Greene and Greene. Charles and Henry Greene opened their architectural practice in Pasadena in 1894. Three of their classic homes, the Gamble House, Thorsen House, and Blacker House are in this post. In a burst of commissions and creativity, all were completed in the first decade of the Twentieth Century. Let’s note this timeline for later discussion. 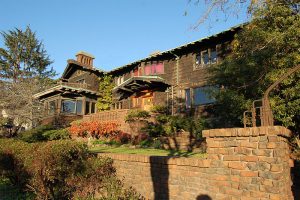 A bit further south, the spectacular George Marston House was designed by William Hebbard and Irving Gill and was situated in the Balboa Park area of San Diego. Completed in 1905, this residence also contained furniture designed for the Marston Family by Gustav Stickley himself.

Personally, I have visited only the Gamble House at the very top of the post, and the Marston House immediately above and below. They are both spectacular. At the same time, the scale and style is friendly and welcoming, not intimidating in any way. An interesting point is the underlying Japanese influence that you find in certain versions of California Craftsman. The Gamble House and the Blacker House are good examples.

Earlier, we discussed the first decade of the Twentieth Century and the explosion of Craftsman homes in California. Additionally, in 1908, Sears, Roebuck and Company began selling kit homes via catalog. The buyer was sold the plans, and most of the materials for what was, quite often, a DIY assembly. Many of these house types were Craftsman. Think about it. Sears was Amazon on steroids over 100 years ago. 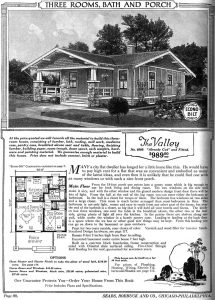 Their livability, simple elegance, and relative affordability led to a proliferation of Craftsman homes across America. My realtor friends tell me that in certain American real estate markets they are in great demand. So it goes!

This is the latest in the series: The Joy of Architecture. Please click here to find them all.  Stay tuned for more. Be safe, and message me for suggestions. John Valentine 305-986-1046.