Your memories of a visit to New York City are typically determined by where you went, with whom, what time of year, what you did, how long were you there, etc., etc. In the case of the native New Yorker, the transplanted, but now hard-core resident, the commuter who journeys into The City, their memories are more nuanced. Today, we haveThe Joy of Architecture – Part Eight – “NYC Nocturne” with a guest contributor. New York architect Laurence Tamaccio has provided us with annotated New York imagery for our conversation.
The Brooklyn Bridge, at the very top of our post, opened in 1883. Designed by the famed bridge building engineer John Augustus Roebling, the bridge always held a fascination for visitor and resident alike. However, since the urban resurrection of Brooklyn, it is no longer a curio or artifact, but a vibrant transportation artery. Our photographer had this comment: “Maybe it’s because the cables create a piano or harp-like appearance but this structure is visual music from the first glance.” 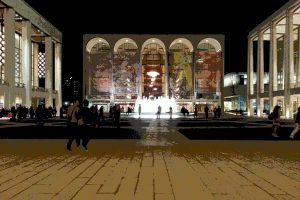 The culturally renowned Lincoln Center, above, is one of many products of the massive urban renewal driven by the legendary, but highly controversial, Robert Moses. The New York Times in his 1981 obituary said: “For 44 years, from 1924 until 1968, Mr. Moses constructed public works in the city and state costing – in a recent estimate adjusting currency to 1968 value – $27 billion. Mr. Moses built parks, highways, bridges, playgrounds, housing, tunnels, beaches, zoos, civic centers, exhibition halls and the 1964-65 New York World’s Fair.” Whatever side of the fence you are on regarding the Moses legacy, Lincoln Center is a global destination. Mr. Tamaccio had this thought: “Whether you are attending an event or just passing by you can feel something magical in the air.” 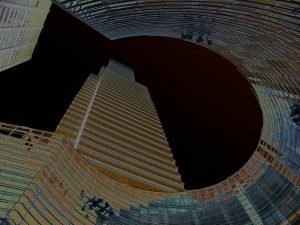 The Bloomberg Tower, above at 731 Lexington Avenue, was designed by Cesar Pelli, and opened in 2004. As you may imagine, it is the HQ for Bloomberg LLC, and has been lauded as a health-centric workplace. The unique shot that Mr. Tamaccio took of the tower inspired him to comment that “on a sunny day, looking up from the courtyard, it’s like looking into a dizzying, spiraling kaleidoscope.” 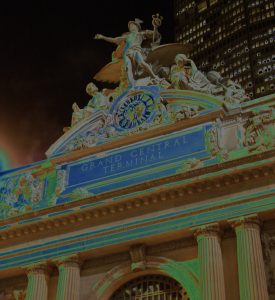 Much more than a mere transportation hub, Grand Central Terminal above, long ago transitioned to cultural landmark status. Through all its iterations it has somehow managed to keep one foot in the world of utility and the other in the universe of elegance. As an architect, our Mr. Tamaccio was particularly insightful on GCT: “We can be eternally appreciative of the historically insightful Jacquelyn Onassis and supporters who saved one of the true crown jewels of Architecture. This is a building that simultaneously conjures up the romance of pure classical design, the boldness of the arts + crafts movement and the prowess of art deco innovation. As much as any building worldwide, it is quintessentially and transitionally a timeless monument of civic transportation hubs.”  We have nothing more to add here. 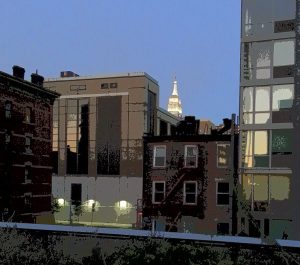 If there was a Hall of Fame for urban landmarks, the Empire State Building would have a plaque on a wall inside of it. We can argue what the most recognizable building in New York is until we all turn the proverbial “blue in the face.” But, let’s not do that. Built during the worst of the Great Depression, the Empire State opened in 1934. In normal times, this Art Deco masterpiece hosts around 4 million visitors per year to its two observation decks. Our contributor explained the image above: “you don’t have to be standing next to it, or even near it, or see all of it. Just seeing the top of it you can feel its majestic power.” 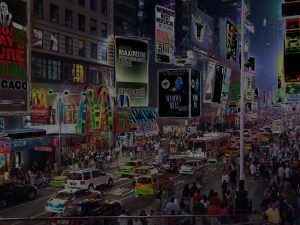 Times Square, as expressed above, may not fit the “Joy of Architecture” subject of this post. However, it epitomizes the “NYC Nocturne“ aspect perfectly. Mr. Tamaccio turned a nice phrase in this most convoluted of places: “Electricity….. Without it there would be no such a place and that is exactly what you feel when you are in the center of it all. Except when it rains and then one of the most crowded places in the world becomes one of the loneliest.”

Our collaborator on this post, Mr. Laurence Tamaccio, holds a BS in Architecture and Photo Journalism from Syracuse University. Previously, he was principal of Laurence Tamaccio Design Destinations, specializing in residential renovations in New York City.  Currently, he is Facilities Architect-Designer for Brooklyn Law School. Today’s work is all his. I was the caddy. 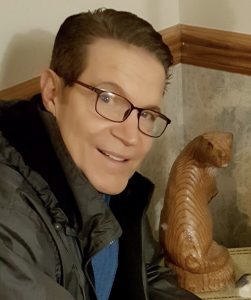 Robert A.M. Stern said “when I was a young architect, I never took a camera traveling because I thought I would look like a tourist. Then I had a realization: I was a tourist. So I began by taking slides, and for the past decade or so, digital photos. When I look at buildings, I take as many photos as possible–it actually helps me to see.” This post makes us “see.”

Stay tuned for more in the series. Be safe, and message me for suggestions on further reading. John Valentine 305-986-1046.