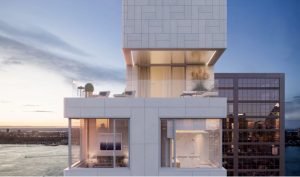 Developed by Sumaida + Khurana and LENY, the 450-foot-tall, 37-story building will be composed of one-, two-, three- and four-bedroom residences, starting at $1.2 million, with interiors by the famed firm of Gabellini Sheppard Associates. 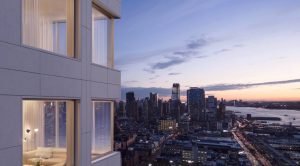 Our friends at Dezeen.com had this to say about the architect and his project: “Siza who won the Pritzker Prize in 1992, is based in Matosinhos, a small coastal city near Porto, Portugal. He began his architecture career in 1954 and has designed buildings in several European and South American countries, along with Korea and China. Among his well-known projects is the Expo’98 Portuguese National Pavilion in Lisbon and its scooped concrete roof, which Siza described in an interview with Dezeen as difficult to create.”

The quick version of why an architect and developer, with this much prestige on the line, would select our New York Stone Panels is told very simply. They are extremely light, easily installed, thoroughly tested, can take a beating, and almost any natural stone can be used. There you have it. Thanks for reading.