I first encountered rainscreen systems while working for a West German conglomerate in the middle of the 1980’s. The organization had developed a ceramic tile panel system that was amazingly light and easy to install. As with so many things, timing is everything. The 1980’s were not quite ready for that product, but the 21st Century appears to be very ready for Lightweight Stone Panel Rainscreens.
It is widely thought that early rainscreens, at least as we know them in modern  construction, started to enter the industry vernacular in the 1940’s. The 1950’s brought some real adoption and the idea became far more accepted in the 1960’s. 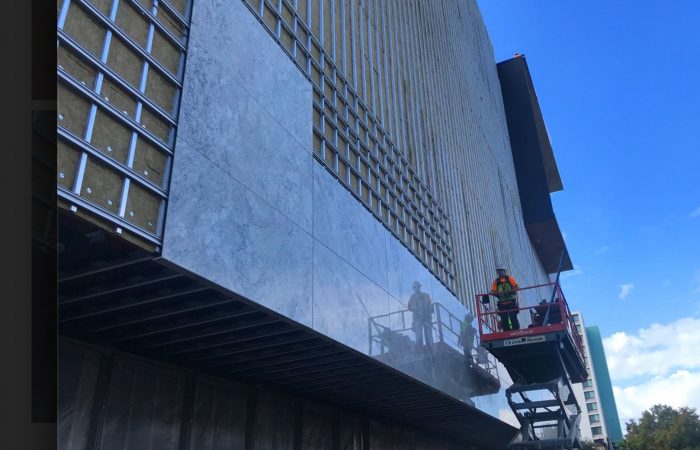 In search of a description and understanding of the rainscreen idea we turn to www.constructionspecifier.com: “The basic definition of a wall designed using the rainscreen principle is that it has two distinct barriers to the outside elements separated by an airgap or cavity. The outer barrier provides the aesthetics of the building envelope and sheds or controls most, but not all, of the moisture hitting the building veneer, while the inner component serves as the final moisture barrier. The cavity provides a capillary break to prevent the flow of water from the outer to the inner barrier. It is also vented to allow pressure equalization between the cavity and the air.” 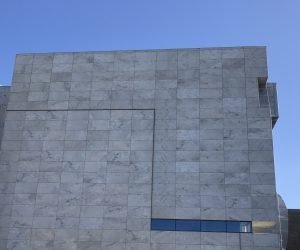 That said, let’s discuss two major types of rainscreens.
1. A ventilated and drained system permits moisture to drain and/or evaporate, then vent to the outside. If this is your plan, the design has to prevent water/moisture from crossing the space between your rainscreen element and the wall substrate the rainscreen is attached to.
2. The pressure equalized rainscreen system creates a condition where air is allowed to move between the inside and outside of the system. The result is a equalized pressure situation that minimizes water from being driven or drawn in through the joints.
The imagery in this post is from the new Museum of the American Arts and Crafts Movement in St. Petersburg, Florida. This architectural achievement is set to open this year. A key design feature of the building is  the Brazilian Granite panels designed as Lightweight Stone Panel Rainscreens . It’s a great time to be an architect. Thanks for reading!